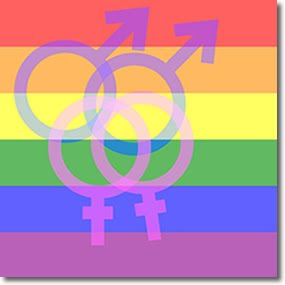 There has been a bit of a kerfuffle over a recent UK study on sexual identity in the UK. Apparently Northern Ireland has the lowest percentage of homosexuals in the UK (gay, lesbian or bisexual), at just 0.9% of the population aged 16 and over. The UK average is 1.5% according to Measuring sexual identity: an evaluation report from the UK government's statistical division (ONS). It is obvious from the report that the statisticians behind it went to great lengths not to 'bias' the answers to their survey, even running it twice using different methodologies (telephone and face-to-face).

And yet the findings have provoked criticism from gay activists claiming the findings are false, as recently reported in the Irish Times. Why? One obvious implication of the findings is that adults in the UK are overwhelmingly heterosexual (94.8% to be precise, excluding the 3.3% who refused to answer). This isn't exactly a huge surprise, and indeed I've noted that precisely the same situation applies to Ireland.

What's interesting therefore is why such a backlash from gay lobbyists? I guess part of the answer is the standard motivation of self-interest. After all, if you are in receipt of enormous amounts of funding from the state and other funding institutions - because of the prevalence of the issues that you champion - then it's kind of awkward if the figures show that your organisation exists solely for the purpose of championing the needs of just 1% of the population.

But I suspect there's more to it than that. It's the logical consequence of the 'equality absolutism' that now applies to all gender issues nowadays (and a few other issues come to think of it). Equality absolutism states that one gender orientation is as valid as another, and in fact every gender orientation must be treated with the same equality of status and esteem as all others. But the fact that 97-99% of the adult population in Ireland and the UK are heterosexual - and it is a fact - sits rather awkwardly with the abolutist equality agenda.

However when the facts get in the way of ideology, the reaction is not to accept the facts but to indulge in a bout of 'heterophobia' (straights are 'breeders' after all). Odd that - and I thought the idea was to be tolerant. I'm all for tolerance myself, but it only works in the long run if everyone abides by the same rules. A bit like facts, for that matter.
Posted by Gerard O'Neill at Sunday, September 26, 2010