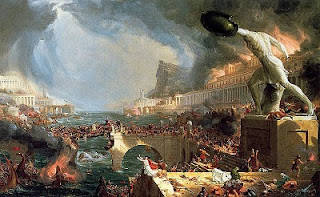 Niall Ferguson doesn't think there are cycles in history. In a lecture which takes its cue from Thomas Cole's famous five-part portrayal of The Course of Empire, he suggests that history is arrhythmic, prone to sudden transitions from seeming calm to unforeseen chaos. But as an historian he does divine some clues as to when the transition might occur (from about 27 minutes into his lecture):

Imperial falls - forget declines, there isn’t a decline, just a fall: bang, off a cliff - are nearly always associated with fiscal crises. With dramatic imbalances between revenues and expenditures. And above all - here’s the key idea - these crises, these dramatic falls, are associated with a mounting cost of servicing a huge public debt. ... When all of your ordinary tax revenues are going on interest payments it is, ladies and gentlemen, game over.

Of course, Ireland doesn't have an empire so we can relax, right? A recent Davy report argues that our debt problems are greatly exaggerated as our debt service costs - though a growing share of taxes (20% of all taxes and rising) - are a long way away from Ferguson's trigger point: 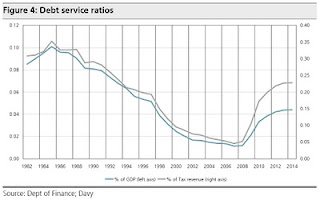 Perhaps. Time will tell, indeed. But Ferguson's arrhythmic view of history warns us not take anything - especially extrapolations - for granted. Whether you're a small country or an empire. It's worth watching the whole thing: sure it's an hour long, but we'll all be living for the rest of our lives with the consequences Ferguson anticipates from the 'history' now being made. Turbulence ahead indeed...