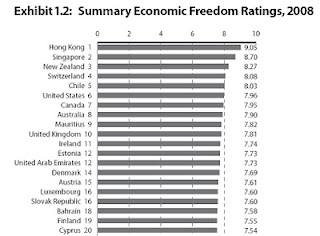 Whilst folk fret about the bond markets a more serious problem is unfolding: we are losing our freedom. The latest Economic Freedom of the World Report 2010 shows Ireland slipping from number 4 (in 2005) in the world in terms of economic freedom to number 11 in 2008. I suspect things have deteriorated considerably since.

There are many factors implicated in the decline, but by far the largest is the growth of the government's share of economic activity. Some of this is cyclical (increases in social welfare payments due to unemployment) and will recede as recovery gathers pace. But in Ireland's case we must beware structural forces driving government's influence in the economy. The EFW report highlights one such force in particular, namely crony capitalism:

As this debate unfolds, it is important to distinguish between market entrepreneurs and crony capitalists. Market entrepreneurs succeed by providing customers with better products, more reliable service, and lower prices than are available elsewhere. They succeed by creating wealth: by producing goods and services that are worth more than the value of the resources required for their production. Crony capitalists are different: they get ahead through subsidies, special tax breaks, regulatory favors, and other forms of political favoritism. Rather than providing consumers with better products at attractive prices, crony capitalists form an alliance with politicians. The crony capitalists provide the politicians with contributions, other political resources, and, in some cases, bribes in exchange for subsidies and regulations that give them an advantage relative to other firms. Rather than create wealth, crony capitalists form a coalition with political officials to plunder wealth from taxpayers and other citizens.

Sounds familiar? To paraphrase Lenin, the crony capitalists will sell the rope that the statists will use to hang the market entrepreneurs. And it's only going to get worse: pretty soon we'll all be paid by the state...
Posted by Gerard O'Neill at Tuesday, September 21, 2010