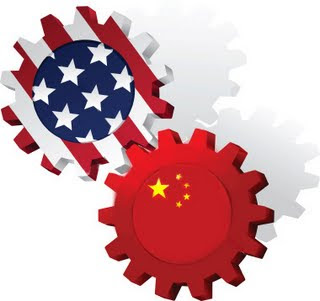 Whilst we're still figuring out who to blame here on Depression Island, the rest of the world seems to be getting on with business. But it isn't business as usual. If anything the global economic crisis has accelerated a profound shift in the relative weight and roles of the major economic blocs around the world. The shift has been in favour of the BRIC economies, especially China. But with the shift has come a very different type of global economy - one characterised less by 'free markets' (to the extent they were really free), and more by a new mercantilism in which economic activities are directed by states in pursuit of nationalist goals.

I listened recently to Ian Bremmer's talk at the RSA (a series you should definitely add to your podcast feed). Ian's take - wearing his Eurasia Group hat - is that the future of the global economy will increasingly be dominated by the mercantilism of countries like China, Saudi Arabia and even Brazil. Especially by state owned companies intent on maximising exports in order to generate the flow of funds their governments need in order to meet their various objectives (political and military). He doesn't think this is necessarily a 'good thing' (as he explains it, mercantilism is even more dependent on continuing economic growth than the 'free market' variety), but he does think it's the new reality and that all Western businesses will have to get used to.

One remarkable consequence of the new mercantilism is the surge in demand for land around the world. What Ambrose Evans-Pritchard calls the global landgrab. Which is another reason why I think land (of the farming variety) is the best long term investment opportunity for those who weren't wiped out by the land-for-building bubble. But beyond land, the new mercantilism is already making itself felt in a host of markets and sectors. The challenge for Ireland will be how best to align our internationally-traded sector with these new realities, whilst also insuring ourselves against the inevitable fall out (trade wars etc) from mercantilism's failure. Because one things for sure, the new variety will fail just like the old variety, though perhaps more spectacularly.

For those interested in the world beyond early morning radio interviews on RTE, I highly recommend subscribing to the Eurasia Group blog and twitter feeds as well as those for the equally excellent Stratfor (their unfolding analysis of American involvement in Iraq/Iran/Afghanistan is second-to-none).
Posted by Gerard O'Neill at Wednesday, September 15, 2010