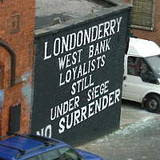 Chris Horn links early 20th century Irish history, on both sides of the border, to the 21st century task of growing Ireland's economy. And it doesn't involve the M1:

It is interesting to reflect on the economic and social concerns of the founders of our State in the early 1920s. At the time, Great Britain was arguably the world’s superpower, and despite the destitution of the first world war, it still led the world in political and military might. Belfast and Northern Ireland were amongst the bedrock of the British economy, with Harland and Wolff, other heavy engineering companies and the linen industry. Northern Ireland was largely Protestant, an ethos which in turn places an emphasis on the independence of the individual, including a direct relationship with God. Entrepreneurship and individual hard work are understood by its devotees as a duty to society and as necessary to build one’s life and social status.

In founding Ireland in the 1920s, I suspect that there may have been a certain reaction against the capitalist ethos of much of Northern Ireland at that time. Most believed that workers were being exploited, that many were marginalised, and that the standards of living were poor whilst all the time entrepreneurs continued to accumulate wealth. The Roman Catholic Church was no doubt very influential on the themes for the new Irish State: cherish all citizens, high ethical standards, and a socially oriented state, rather than rampantly capitalistic. Whilst Protestantism places an emphasis on the individual, Catholicism expects the Church and its leaders to make decisions on behalf of the people. The people in turn arguably expect the Church to deliver their salvation, rather than each individual by himself or herself. Individual initiative, including wealth creation, may have been seen by some as challenging the role of authority and what was best for society as a whole.

Unfortunately the dire realities of our new found (relative) poverty require us to be a lot more 'Protestant' in the South:

I believe that Ireland is at a cross roads. We have created an economy which is open to international trade, but which is now internationally viewed as having an uncertain future. We have created an expectation of the State paternally providing for its citizens, and in particular for employment and for welfare, but which is now threatened by unsustainable national debt. We have created a society in which personal wealth is viewed with deep suspicion about how it was accumulated, what strokes may have been involved, and to what extent tax is being evaded.

He's right, of course. We can't go back to a dysfunctional combination of 'Catholic Corporatism' coupled with an emigration safety-valve to stop our youth taking to the streets. We have to become more 'Protestant' in the Weberian sense: looking to ourselves rather than to others to build businesses, create jobs and accumulate wealth (of the real variety, rather than the ponzi version we got during the boom). The good news - according to a recent IDA/IMI report on innovation in Ireland - is that we not only know what it takes to be entrepreneurial and innovative, we've got what it takes.

And the other thing going for the Republic of Ireland right now is that it isn't Northern Ireland: ironically the Protestant Ethic is fading fast up North. As the Centre for Social Justice report on Breakthrough Northern Ireland makes clear, the North is now in the grip of a level of state economic dependency and societal collapse that is a far cry from the future envisaged by Edward Carson back in the 1920s when the economic future looked so much brighter North of the border.

The next ten years may well widen the economic divide on this island, even as the new M1/A1 brings us closer.