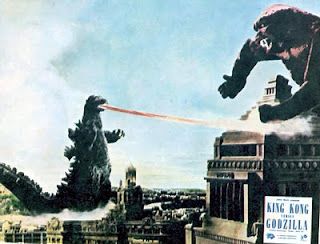 Not since Godzilla vs King Kong - or even Alien vs Predator - has there been a contest like it. I'm referring, of course, to Foreclosure-Gate: the latest, Godzilla-sized financial scandal to hit the United States (and, shortly, the rest of the world). I was first alerted to it by Gonzalo Lira - he explains it thus:

Long story short (since this is the short version): A lot of the foreclosed properties might not have been foreclosed legally. The people evicted might still have a right to their old houses. The new buyers might not actually own the REO’s they bought off the banks. The banks could be on the hook for trillions of dollars, and in the sights of literally millions of lawsuits.

Do read the whole thing. It makes our own problems with NAMA and poor loan documentation pale into insignificance. Meanwhile, Charles Hugh Smith thinks the lawyers are in for the boom of a lifetime:

He forgot to add the pension funds who have been left owning now worthless Mortgage Backed Securities (okay, they were already 'depreciated' in value before this, but now it looks like they weren't worth anything to begin with). The problem is, with everyone suing everyone else then the US housing market, and with it the entire US financial industry will ground to a halt.

This is where the politicians have to step in to referee the coming celebrity deathmatch between (last count: 40) US Attorney Generals and Bank of America et al. Up until now, the Obama administration has bent over backwards to support the banks (even Paul Krugman is tiring of President Obama's pro-bank stance). Though Obama recently vetoed one attempt recently by the US Congress to force through a bank friendly piece of legislation that would have prevented out-of-state scrutiny of their fraudulent documentation practices.

Halloween is going to be scarier than usual for America this year. Let's hope the rest of us don't get caught up in the nightmare.
Posted by Gerard O'Neill at Saturday, October 16, 2010