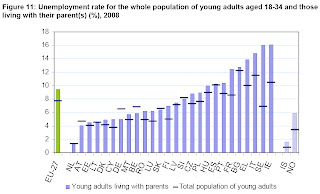 Eddie Hobbs advice to parents of adult children is "24: out the door". Unfortunately it's looking more like 34 these days. The latest Eurostat data shows that Ireland has the largest 'cuckoo generation' in Europe, i.e.: those 18-34s living at home with their parents because they are unemployed. The unemployment rate is just over 16% for 18-34 year olds living with their parents in Ireland. Sweden is second highest.

In fact, over a third of 25-34 year old Irish men are living with their parents. Nearly twice the ratio of 25-34 year old women. Though that's about par with the EU average. The percentage for men rises to 48% in Italy and to 61% in Bulgaria. Mamma mia.

So there's another reason for Ireland's 'over-saving' 40 and 50-somethings to get spending in order to stimulate economic growth. If you don't it'll be "out the door at 44" - that's if you're lucky...
Posted by Gerard O'Neill at Friday, October 08, 2010