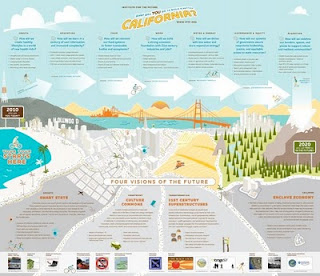 Ireland is suffering from more than one type of deficit right now. There's the financial deficit of course, but there is also a 'hope deficit'. When we look to the future we do so through a prism of fear and despair. Worse, the pressing nature of short term developments is crowding out our capacity for longer term thinking. It is as if a surfeit of pessimism has drowned out any residual optimism.

That said, we have never been very good at thinking about the future in Ireland - in good times or bad - as I've noted before. The absence of an institutional capacity for foresight has undoubtedly contributed to the current impasse. As Robin Hanson has noted about most politicians and pundits talking about the future:

...few folks actually care much about the future except as a place to tell morality tales about who today is naughty vs. nice.

And so it is with the evolving debate about the Government's budget and plans to reduce the deficit by 2014. People will cling to the seeming certainty of tax and spending projections rather than face the extraordinary uncertainty of envisioning a better future for Ireland as a nation, and not just as an economy.

Fortunately we can look elsewhere for guidance as to how to envision such a future. The Institute for the Future has recently completed an exercise for California - called California Dreaming - that invited participants to map the future. It's a very relevant example, not least because California faces some of the same problems as Ireland (a massive government deficit and the inability to devalue its currency). The IFTF has mapped out four scenarios for California, elements of which apply to us.

But the bottom line - for California as well as for Ireland - will be finding a path to sustainable economic growth, one aligned with the new global realities unfolding over the next decade. Growth will stimulate the investment and job creation that will provide the taxes needed to fund both the debt and deficit. However, again just like in California, the capacity for government to be a source itself of either investment or job creation will be severely constrained. The onus then be on the Irish private sector - especially our exporters - to deliver growth.

The economy will only be part of the story of course (and I'll return to it in my next post). As a nation we will have to make decisions about how we govern ourselves (the sooner the better); about what we consider to be necessary public spending rather than just nice-to-have indulgences; and even about the values that distinguish us as a people (such as our capacity for compassion). But what we must avoid is assuming that all this is someone else's job, say, that of our politicians. I think they have clearly demonstrated that they are not up to that (or most any) job.

It will be over to each of us - in our families, communities, churches, clubs and workplaces - to figure out where we're going and how we're going to get there. And we must do so with confidence and without fear. We must dare to be optimistic in these dark times.
Posted by Gerard O'Neill at Saturday, October 02, 2010

Email ThisBlogThis!Share to TwitterShare to FacebookShare to Pinterest
Labels: California, Institute for the Future, Ireland in 2050, Robin Hanson