Marriage and the Economy 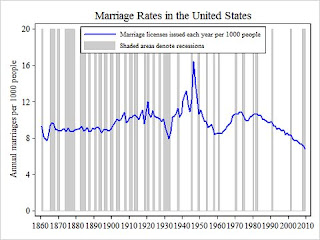 Justin Wolfers has taken a Freakonomist look at the declining marriage rate in the United States. The marriage rate in the USA (as in the UK) is now at historically low levels. Some are blaming the recession: Wolfers doesn't - he thinks it's more to do with the emergence of 'hedonic marriages', i.e.: marriages based not on the economic benefits of playing specialized roles but on shared passions. In the past doctors married nurses, now they marry other doctors. But this arrangement has a knock on effect 'down the line', and it is less-educated women who are less likely to marry nowadays.

Ireland is defying the US/UK trend, for now. But as the recent civil partnership legislation confirms, Ireland's policy and law makers do seem intent on following much the same path as elsewhere, and we will no doubt witness many of the same consequences. Does it matter? From an economic perspective, the answer is unequivocally yes. As I've noted before, marriage means less demand on the resources of the state. But there's more than economics and public finances at issue.

One simple explanation for this is the nature of childcare. The family does it better, and cheaper, than the state. As usual, Whiskey's Place captures the zeitgeist brilliantly:

Child care is perhaps the most labor intensive function in human society. Successful citizens require almost 24/7 child care for the first 10 years of life, and considerable investment after that. This is why Plato's Republic scheme, where the state would raise children instead of the family, has always failed. Even Sparta, eventually fell, because they had few children, and many slaves, and lacked in the end enough manpower despite their martial prowess, to defend against their Greek city-state enemies. No people invested more in Plato's idea of the state raising children, and no nation fell more quickly once they lacked enough citizens to put in arms against their enemy.

Thus the future of the West, and of China, is the end of wealth creation and indeed preservation. Wealth creation on a broad, society wide scale, has only been accomplished by having a nuclear family society. Where families on their own accord, for their own interests, invest staggering sums of capital, labor, and time in producing wealth creating men and women of the next generation.

Though he's decidedly pessimistic about the United State's capacity to restore a healthy marriage culture. But it isn't just about economics. There's also the small matter of freedom. Allan Carlson gets to the heart of the matter:

More oddly, for the first time in human history, natural marriage has to justify itself in democratic countries before the court of public opinion. What had been obvious to most prior human societies, over the centuries and around the globe, is now “an issue.” The main reason for this, I think, is the modern superstition that the past has nothing to teach us: the assumption that our ancestors were all moral barbarians, ethical troglodytes full of prejudice and mainly devoted to attacks on human dignity and human differences. This might be called the arrogance of Presentism. For the same reason, religions resting on inherited dogma stand as particularly suspect.

Briefly put, marriage ― as conventionally understood ― is a bulwark of liberty... The telling reality is that every modern totalitarian movement ― every enemy of a free society ― has moved early and aggressively to disrupt or destroy the institution of natural marriage.

Someone once said that there are six interested parties to a marriage: the bride, the groom, their respective families, their unborn children, and society. Maybe we should add a seventh: the economy. Perhaps if the bond markets factored Ireland's relatively healthy family landscape into their calculations they might take a percent or two of the rates. Right now, our marriage statistics would suggest we're better long-term prospects to repay them than the United States. For now anyway.
Posted by Gerard O'Neill at Wednesday, October 13, 2010