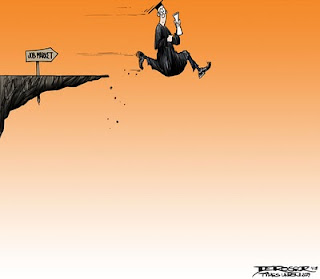 The shake up of third level education in the UK (including a 40% cut in teaching budgets over the next 4 years) is a precursor of similar to come in Ireland. Third level fees will inevitably be part of the adjustment ahead (and a welcome one in my opinion - even with two children in third level!)

But there is something more profound under way. It's beginning to look like we have witnessed 'Peak Academia' - the passing of a golden age of rising student numbers, rising budgets, and rising investment in university-based research. Partly this is being driven by cuts in overall funding (and not just in Ireland and the UK). It will also be driven by the dawning realisation that - as third level fees rise - then the economic benefits of a third level education will diminish. It is estimated in the UK, for instance, that if tuition fees rise to £7000, then degrees in the arts, humanities and non-economics social sciences will be bad investments for men (though not for women). In other words, the cost of getting degrees will exceed the resultant uplift in future earnings.

But Peak Academia - and the downward curve we are now entering - will be driven by more than mere budgets. Bruno Frey (one of my favourite 'happiness economists') fears a Withering Academia. His take:

It has been argued that there are strong forces undermining the present-day academic system. The major forces identified are the rankings mania, the increased division of labor in research, the intense publication pressure, academic fraud, dilution of the concept of “university,” and the independence of scholars and students from particular universities. These forces are seen to lead to a meltdown of academia. In particular, the present university system is expected to radically change and thus a century old tradition to die.

Academia in the broader sense, that is, “the locus of seeking truth and learning through methodological inquiry,” will continue to subsist in different forms because it performs a vital function in society. The conclusion therefore is pessimistic only with respect to the academic system as it presently exists but not to scholarly endeavour as such. However, the transformation predicted is expected to be fundamental and to perhaps take place sooner than one might think.

Third level education will become multi-level in the near future, including the emergence of 21st century monasteries. If we're going to be smart about the smart economy then navigating the turbulent world of learning and research post-Peak Academia will challenge all of us. Parents included.
Posted by Gerard O'Neill at Friday, October 22, 2010