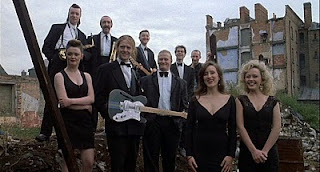 Are we on the threshold of a new renaissance in Irish creativity? I'd like to think so. Creativity (along with Commerce and Compassion) should form part of our national narrative for 2016 and beyond. It may seem perverse to suggest that creativity might flourish against a background of economic recession/depression. But not only has it done so before - often the two have seemed inexorably connected.

Mark Hudson, writing in today's Daily Telegraph, makes a similar, brave forecast in light of the UK government's recent cut backs in funding for the arts:

There have always been two kinds of artists: those who go out to the Bohemian edge on our behalf – from Shelley to William Burroughs – to those (probably always the majority) who exercise their imaginations from a position of bourgeois comfort. If the former kind of artist seems almost to have disappeared, the prestige and influence enjoyed by the latter steadily grows.

...Looking back on the products of some previous periods of adversity in this country – from the near-punitive candour of Orwell’s 'the Road to Wigan Pier’ in the Thirties to the eerie unease of the Specials’ 'Ghost Town’ and the savage social comedy of 'The Boys from the Blackstuff’ in the dark days of the early Thatcher period – you can hardly wait for a revival of that kind of mordant, acerbic vision to adminster a jolt to a culture bludgeoned into near imbecility by consumer-oriented television and money-driven pseudo art.

I have similarly fond memories of Dublin in the 1980s: from Roddy Doyle to The Commitments to, em, U2. That cultural energy played some part in the economic revival that caught fire in the 1990s.

So let that be some consolation in the dark times ahead: I predict that the light of Irish creativity will soon shine brighter than it has in recent decades. And it too will energise the next chapter in our national story.
Posted by Gerard O'Neill at Saturday, October 23, 2010