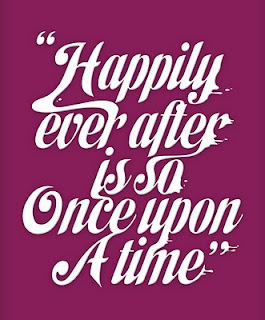 Douglas Coupland got me thinking with A Radical Pessimist's Guide to the Next 10 Years. It's a slightly tongue-in-cheek list of things we'll all have to get used to in the future. Some of them more serious (and more likely) than others, to be sure. Though the one that got me thinking was item 28 on his list:

The way we define our sense of self will continue to morph via new ways of socializing. The notion of your life needing to be a story will seem slightly corny and dated. Your life becomes however many friends you have online.

I don't like his idea, but I get it intuitively. The power of story or narrative is something I've touched on before. The collapse of story in our lives may well be a longer term cultural consequence of the recession. A VoxEU paper on the long term effects of recession on values notes that:

So it is the current generation of young people that will bear the psychological scars of Ireland's uniquely severe recession (unique in OECD terms). And if one those scars is the inclination to postpone the future (renting not buying, cohabiting not marrying, jobs rather than careers), then it is easy to see how a story of a predictable life course might, indeed, seem corny and dated.

Sad really. Though there's one remarkable compensating factor. We appear, as a people, to be getting through this recession remarkably intact - emotionally speaking, that is. The latest Eurobarometer survey on Mental Health in Europe suggests that the Irish are amongst the most emotionally positive - scoring well above the EU average for happiness, calm and energy: 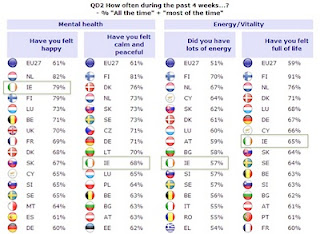