Mike Soden recently proposed that Ireland should leave the EU and join the United States to become their 51st state. I think this is unimaginative. I've a better idea: why not leave the EU and join the People's Republic of China to become its 3rd Special Administrative Region? After all, we would be aligning ourselves with the long term outlook for the global economy.

Andrew Mold has recently calculated the impact of the financial crisis in the West on the shape of the global economy in 2030. Bottom line - China will be twice the size of the United States: 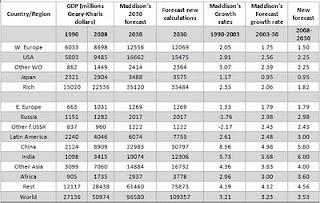 Nor should we forget that we would bring something special to the negotiations - something the Chinese would value much more than the United States: our relatively young population. A fascinating essay on global ageing trends in Foreign Policy notes that:

Those who predict a coming Asian Century have not come to terms with the region's approaching era of hyper-aging. Japan, whose "lost decade" began just as its labor force started to shrink in the late 1980s, now appears to be not an exception, but a vanguard of Asian demographics. South Korea and Taiwan, with some of the lowest birth rates of any major country, will be losing population within 15 years. Singapore's government is so worried about its birth dearth that it not only offers new mothers a "baby bonus" of up to about $3,000 each for the first or second child and about $4,500 for a third or fourth child, paid maternity leave, and other enticements to have children, it has even started sponsoring speed-dating events.

China, for now, continues to enjoy the economic benefits associated with the early phase of birth-rate decline, when a society has fewer children to support and more available female labor for the workforce. But with its stringent one-child policy and exceptionally low birth rate, China is rapidly evolving into what demographers call a "4-2-1" society, in which one child becomes responsible for supporting two parents and four grandparents.

As one of the few countries in Europe with a growing population that should make us even more appealing to would-be suitors. Ambitious Irish people are heading to the Wild East to make their fortunes - maybe the whole country should go there? Better to be on the side of history's winners...