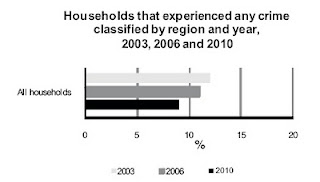 Imagine Ireland experienced a severe recession - the unemployment rate tripled, GNP shrank by 20%, and emigration stalked the land - what do you think would happen to the crime rate? Most likely you would imagine the exact opposite of what has actually happened here in recent years. For according to the CSO, Ireland's crime rate has fallen steeply - from 12% of households experiencing any crime in 2003 to just 9% in 2010.

It's a trend that flies in the face of the 'apocalypse now' school of commentary. And a reminder that we are still a comparatively wealthy country. But not just economically. According to this week's United Nation's Human Development Index we rank number 5 in the world (using a combination of social, economic and educational measures). The World Bank announced this week that Ireland is number 9 in the world in terms of Ease of Doing Business. Similarly the recent Legatum Prosperity Index ranked Ireland number 11 in the world on a series of prosperity measures.

The realities on the ground are that Ireland is a country with the resources and strengths to get through our present, politician-induced crisis. We see it everyday in our families, communities and workplaces. We will get through the crisis, despite the ineptness of our country's leadership, and despite the banshee chorus of gloom-and-doomsters and their 'end times' fantasies which seek only to emphasize the negative.
Posted by Gerard O'Neill at Saturday, November 06, 2010