Germany Should Leave The Euro

Yes I know, it's a bit counter-intuitive. But I think Simon Heffer has it right:

The best solution for Europe would break the dream altogether: for Germany, the strength of whose economy distorts the value of the euro, to leave the eurozone and re-establish the Deutschmark. This would drive down the value of the euro precipitately, but would make things easier for the ailing economies within it. The Germans would lose nothing: in fact, quite the reverse, as they would have a currency whose strength would be undiluted by unregenerate profligates and spendthrifts in Ireland and in Club Med, and could go around buying up the world with their enormous economic strength. Meanwhile, everyone else could regroup. Any country that felt insulted by this (as I suspect France might) could ask instead to join the Deutschmark zone, if it was mad enough.

It's the best idea that I've come across so far in the current crisis. And here's the best image (ht zero hedge): 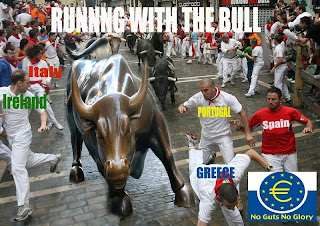