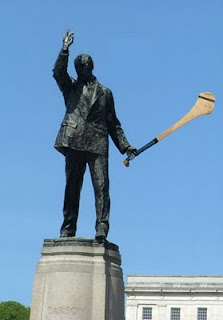 I'm rather fond of well-written polemics myself, especially those that assail the orthodoxies of the day. But there's the funny thing: pessimism porn is the orthodoxy of the day. Daily we are assailed by a doom loop of "it's all over, we're all going to die" by the nation's media, academics, NGOs, trade unions and political parties. Hell, even the Government's handlers don't even bother trying to put a positive spin on things any more... And another funny thing, four years ago the orthodoxy was a relentless boom loop, and poor old Morgan was like Don Quixote tilting at windmills. Well guess what, now he owns the windmill.

But it wasn't so much the content of Morgan's rant that I found annoying so much as the stance. It was a classic example of that ancient Irish tradition of 'the hurler on the ditch': with the 'expert' on the sidelines shouting advice at the players without actually getting involved in the rough and tumble himself. He doesn't have any skin in the game, to use the equivalent American idiom. His penultimate paragraph gives it away:

You have read enough articles by economists by now to know that it is customary at this stage for me to propose, in 30 words or fewer, a simple policy that will solve all our problems. Unfortunately, this is where I have to hold up my hands and confess that I have no solutions, simple or otherwise.

So perhaps a little self-flagellation is in order? Now I'm not going to say that Morgan is being unpatriotic or that the Irish Times has been irresponsible in publishing his piece or that it's all very well for him in his tenured ivory tower yada yada. It's too easy to exaggerate the impact of such things (nine out of ten adults don't read the Irish Times and all that). And like I said, I do enjoy a good polemic myself from time-to-time.

But his polemic bugged me. Partly it was the supercilious introduction with the faux 'breaking news' story from Our Lady of the Eurozone Hospital, but mostly it was the silly - and I mean embarrassingly silly - attempt at a Gerald Celente style forecast of impending social unrest, neo-fascism and Mad Max redux. Or should that be Mad Mick? Though I do enjoy Gerald, I must admit. Here's Morgan:

As ordinary people start to realise that this thing is not only happening, it is happening to them, we can see anxiety giving way to the first upwellings of an inchoate rage and despair that will transform Irish politics along the lines of the Tea Party in America. Within five years, both Civil War parties are likely to have been brushed aside by a hard right, anti-Europe, anti-Traveller party that, inconceivable as it now seems, will leave us nostalgic for the, usually, harmless buffoonery of Biffo, Inda, and their chums.

Of course, the awkward fact that there are absolutely no harbingers of this happening should not be allowed to get in the way of an unhappy ending.

Here's the thing: nothing about the future is definite. Not the weather, not the bond markets, not next year's budget deficit, not GDP growth, nor any other macro-economic variable. The past is more definite - here I agree with Morgan that the bailout of the bondholders by the taxpayers was, and is, an outrage. But you can emphasize the negative (the glass is half empty and the rest of the glass is going to waste), or you can challenge his assumptions about the future (and that's all they are) - as John McHale has done - and reach a different conclusion.

Though it may not get your heart pumping quite so fast.
Posted by Gerard O'Neill at Monday, November 08, 2010