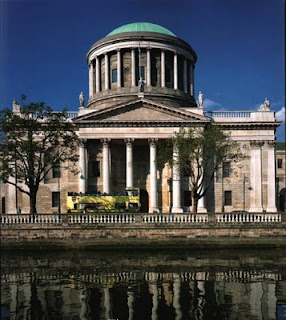 The behaviour of any bureaucratic organization can best be understood by assuming that it is controlled by a secret cabal of its enemies.
Robert Conquest's Third Law of Politics

Ireland's bankers and politicians - as well as the occasional foreigner - have been painted as the primary actors in our unfolding tragedy. But what about the lawyers? P O'Neill asks this crucial question in a recent post over at A Fistful of Euros:

...the Irish political system is strangely deferential when a legal argument is deployed. All that’s necessary is some muttering about a measure being potentially prejudicial, or better still, posing constitutional problems, and a form of helplessness takes over. This explains a lot.

...So here we are. Other countries in economic distress might be entitled to worry whether having loaded up on Ph.D. economists in positions of power was such a good idea. For Ireland, the question is where all the lawyering has gotten us. Somehow the country never rose in importance as the client compared to the party.

But Ireland may be an exception to Conquest's third law - as it is to so many other frameworks of political analysis. For our governing cabal isn't acting in secret: it's hiding in plain sight. Their behaviour is there for all to see...
Posted by Gerard O'Neill at Sunday, November 21, 2010