Ireland is being asked to cut to social services, slash wages, renegotiate contracts, and dismantle the welfare state so that undercapitalized banks in France and Germany can get their pound of flesh. But, why? They're the ones who bought the bonds. No one put a gun to their head. They knew they could lose money if Irish banks went south. That's the risk they took. "You pays your money, and you takes your chances." Right? That's how capitalism works.

Even the Financial Times today observes that Ireland has to choose between the solvency of its government or that of its banks (ht Irish Economy blog).

Unfortunately the issues at stake are not just about economics - or capitalism for that matter. A lot of it has to do with politics and the disgusting spectacle of those who would cling to power (even as they become increasingly powerless) rather than let the Irish people exercise what remaining sovereignty they have to elect a government they can believe in.

I speculated recently that the recession might at least inspire a new era of creativity. The image below might be more agitprop than art, but it gets the message across all right (ht politics.ie): 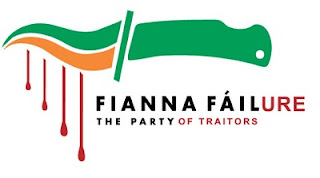