Running Out of Cliff 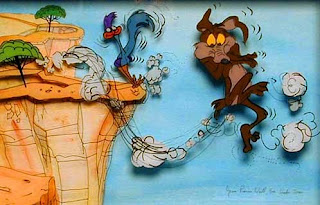 Neither defeat nor misfortune diminishes the appetite for life. Only betrayal extinguishes it.
Don Colacho's Aphorisms #2,270

The map is not the territory, and the forecast is not the future. The Government's four year plan published this afternoon is just one take on what the next few years might mean for Ireland. But the plan's real purpose is to signal to international and domestic audiences that the Government is in control of the situation (sort of) and taking the necessary steps to ensure it remains that way. If it succeeds in doing so, even for a few months, then it will have served some useful purpose. But it is no more a guide to the next four to five years than the leaves in a teacup, though the latter might taste less bitter.

I don't doubt the difficulties faced by the Government, its advisors and everyone else involved on the Irish side of the unfolding debacle. There are few options, and none of them are painless nor guaranteed to succeed. The Government tried to bluff the markets back in September 2008 with its blanket guarantee, and now unfortunately that bluff has been call. Not even the European Union can put the blanket back.

Right now it feels like we are running out of cliff and economic gravity is exerting its pull. But the real tragedy in all of this is the total loss of trust between the Government and the governed. Now, whatever happens, there is a pervasive foreboding that the Irish nation is being betrayed. If not by knaves then by fools.

But life goes on: customers need to be served, and employees need to be occupied. Plans also need to be made, not plans pretending to know the future, but real plans that explore the future and the opportunities it will bring. That's what properly free markets (and countries) do best.

So we must retain our appetite for life and for freedom and for success, however defined. But right now I am a micro-optimist even if increasingly a macro-pessimist. The latter probably explains why I couldn't get this song out of my head today: