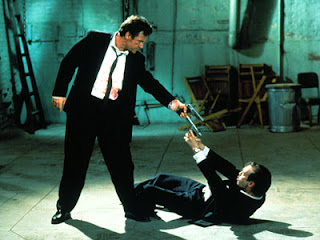 Can Ireland afford to bail out Germany's banks? And Britain's for that matter? According to Wolfgang Münchau in today's FT, the two largest creditors to Ireland are the UK and Germany - owed $149 billion and $139 billion respectively. The extent to which the Irish bailout is as much a bailout of German and British banks is becoming clearer by the day. It's bad enough to ask the Irish taxpayer to pick up the bill for rogue Irish banks - but rogue German banks?

We are now suffering the consequences of a giant 'vendor finance' scheme facilitated by the euro. The huge trade surpluses generated by Germany in the past decade (one benefit of a 'weak' euro rather than a 'strong' deutschmark) were recycled by German bank via loans to the eurozone's peripheral economies - who then bought German exports via a consumer spending boom and housing bubbles.

Lisa O'Carroll reports in today's Guardian, for example, that the German bank Hypo Real Estate has the largest exposure to Irish sovereign debt (some of it, no doubt, incurred in efforts to bail out Irish banks). Also, the blogger Golem XIV gives a blow-by-blow account of how German banks - trying to escape their domestic regulatory restraints - used Ireland during the boom to take bigger financial risks than would have been legal back in Germany .

Needless to say, not all eurozone economies reacted with the same unrestrained gusto of a teenager with their first credit card to the cheap debt made available by the vendors. Our own banks (and non-regulators, with our politicians cheering from the sideline) did their very best to max out the euro credit card, and then some. But that is the sorry pass we have reached. The urgency of the IMF/ECB/EU efforts these past few weeks to do a deal in Ireland has been driven by the very precarious situation faced by the larger European lenders exposed to Ireland. The Irish taxpayers comes last on the list at this particular 'creditors meeting'.

Today's editorial in the FT calls for Ireland's creditors (including senior bond holders) to take a haircut - demanding, not for the first time, that Ireland and Europe must face down its reckless creditors, for otherwise it will happen again. Our creditors may have a gun to our head: but we have a gun pointing at theirs too.
Posted by Gerard O'Neill at Tuesday, November 23, 2010