One of my favourite conservative commentators - Theodore Dalrymple - explains the absence of riots in Ireland thus:

Of course the politicians and their cronyism are to blame for the situation, but the population voted for them, not in spite of the bubble they created but because of it. An awareness of this has, to the honor of the nation, limited the vehemence of the scapegoating.

The second reason for the relative calm that prevails in the midst of existential crisis is an awareness that the Irish are not the sole authors of their downfall. As the late and much-lamented Mobutu Sese Seko once remarked, it takes two to be corrupt; and likewise it takes two (at least) to make improvident loans. There is no foolish borrower without a foolish lender. If I were a Marxist, I might call the relationship between them dialectical.

The shame of what has happened is more widely distributed than we sometimes realise. Just who were the 'foolish lenders', to use Dalrymple's phrase? Deutsche Bank research* has just published a handy guide entitled Monitoring cross-border exposure: A primer on how to exploit the BIS banking statistics. Although the data is only up to Q2 2010 (and we know an awful lot has happened since), the findings are nevertheless fascinating (and in some instances quite surprising). For example, French banks are the most exposed to Irish government debt: 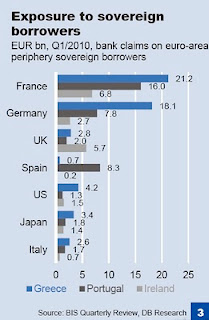 Another surprise - it is Danish and Belgian banks that are proportionately the most exposed to Ireland: 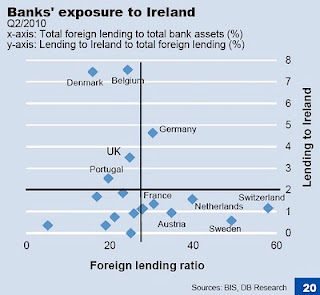 Even before the most recent crisis there were desperate attempts by foreign lenders to reduce their exposure - in the year to Q2 2010 British banks reduced their exposure by nearly 30%: 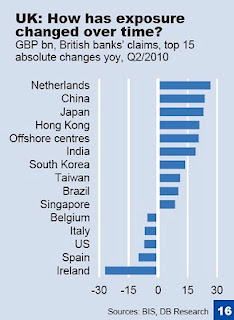 But the bottom line hasn't changed - it is German and British banks that are the most exposed to Ireland, to the tune of well over €125 billion each:

There's still plenty of shame to go around.

*The DB Research papers are usually excellent, by the way. I recommend their free subscription service.