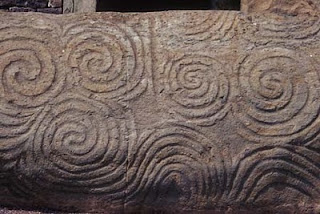 At each moment we're at the edge of a paradox described by the Greek philosopher Zeno. Because an object can't occupy two places simultaneously, he contended that an arrow is only at one place during any given instant of its flight. To be in one place, however, is to be at rest. The arrow must therefore be at rest at every instant of its flight. Thus, motion is impossible. But is this really a paradox? Or rather, is it proof that time (motion) isn't a feature of the outer, spatial world, but rather a conception of thought?

It turns out that time is a mental construct, not a physical 'reality', something intuited by earlier peoples, including our Celtic forefathers and their circular concept of time. Lanza again:

As I see it, immortality doesn't mean perpetual (linear) existence in time but resides outside of time altogether. Life is a journey that transcends our classical way of thinking. Experiment after experiment continues to suggest that we create time, not the other way around. Without consciousness, space and time are nothing.

Hmm. Does this mean we can go back to Government Buildings and the 29th September 2008 and make a different decision? Now there's a thought. Or is it?
Posted by Gerard O'Neill at Sunday, November 07, 2010