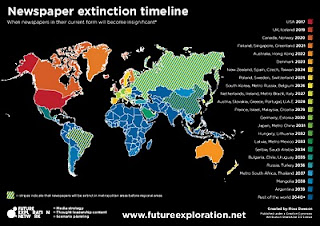 Here's a forecast you won't read in any Irish newspaper: Irish newspapers will be extinct by 2027. Okay, like all such projections/extrapolations/conjectures it does need to be taken with a large pinch or two of salt. The forecast is from an interesting assessment of the extinction timeline for newspapers worldwide by Ross Dawson.

The detail is in the assumptions, of course, and Ross has sensibly included a combination of global/technological and national/demographic forces to derive his outlook for each country. As ever, it's hard to distinguish the short term from the long term - the recent decline in newspaper readership in Ireland appears to be as much a function of the recession as of any longer term trends.

That said, he wisely does not define 'extinction' as the complete cessation of newspaper production per se - but rather its evolution into something very different to the traditional definition of a newspaper. Dinosaurs becoming birds sort-of-thing. Personally I am more optimistic (at least for Ireland), in that I think by 2027 Irish newspapers and Irish newspaper readers will continue to drive a market similar to today's - though undoubtedly smaller (digital circulation will be bigger than paper circulation). People don't read newspapers for the news, rather they read them for entertainment and analysis (from sport to politics).

The amazing thing is not that there will still be newspapers in 2027, it's that there are any newspapers in 2010, saturated as we are in a rich mediascape of radio, television, web and mobile content. Mind you, with UK newspapers approaching the extinction horizon by 2019 it will be interesting to see how those UK-owned titles that have succeeded in Ireland will continue to cope with the increasingly divergent fortunes of the two markets...
Posted by Gerard O'Neill at Monday, November 01, 2010