What have the Koreans ever done for us? 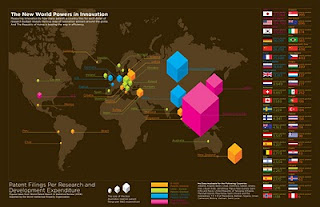 I ask because we are at a dangerous stage in the project of globalisation, with the threat of currency wars leading to trade wars. And there is much to lose. The chart is from a study of global innovation: it seems South Koreans file more patents per dollar spent on research than any other country in the world. By a long shot. I find that very reassuring: it is no longer up to the West to provide all the innovations that improve economic productivity and our quality of life.

Unfortunately the appetite for international trade that drives such innovation is waning. Here in Ireland we are still more pro-trade than the rest of the EU (49% of Irish people feel they benefit from it versus 44% of all Europeans), as shown in the next chart from a new Eurobarometer report: 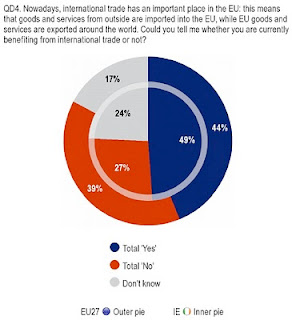 But we are well down the European rankings in terms of being pro-trade, and the worrying thing is that the 'anti-trade' constituency in Europe is nearly as large as the pro-trade one. A return to a policy of 'ourselves alone' will bring the current age of global innovation to a grinding halt, as well as economic growth and improving standards of living for the world's poorest along with it. We should know here in Ireland: we ran that experiment before and it didn't have a pretty ending.

The good news is that we can look forward here in Ireland to a new generation of innovative products and services that will improve our lives immensely. You can get a taste of the future from the excellent TrendWatching.com guide to over fifty consumer innovations from the BRIC economies and others (though not Korea for some reason). Sure, a lot of it is stuff we've already got from other sources. Many of the innovations are simply variations on a theme to appeal to local tastes. But give it time: these are early days and those patents will eventually make a real impact.

Take the example of the Chilean entrepreneur Fernando Fischmann, profiled in a fascinating episode of GlobalBiz. Using his training as a scientist he has built a company - Crystal Lagoon - that uses patented technologies to clean water in pools and man made lagoons with just 2% of the traditional energy inputs. He already has contracts generating $600 million in royalties from his patent...

This is where it gets interesting. Because one of the biggest problems facing us is the energy cliff as current oil production sources run out. The latest WEO forecast paints an alarming picture - including this chart: 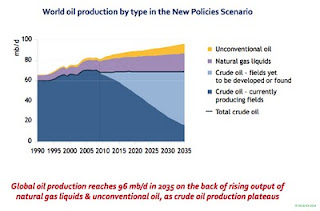 It will be innovators and entrepreneurs like Fernando Fischmann - and his counterparts in China, Brazil, India and Korea - that will help close the gap. We are in a race to the top - and it's a relay race. I don't doubt that the Koreans - and others - will do a great deal for us here in Ireland in the years and decades to come.
Posted by Gerard O'Neill at Wednesday, November 10, 2010