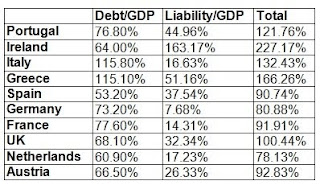 Where's Bono when you need him? The man who railed against the bondage of immoral and unjust debts has been strangely silent about Ireland's own descent into debt bondage. Let's face it, we're going to need Bono and few more besides to make the case for debt forgiveness for Ireland. Unless we want to form a new category of 'formally developed' countries.

The scale of the task is immense. The table - from VoxEU today - shows Ireland to be an outlier once again. The Liability/GDP column is the authors' calculation of the potential losses arising from a banking shock in each country. Only in Ireland is the ratio bigger than that for national debt to GDP.

It is fairly clear: we have to deflate our debt, and our options are limited. Michael Pettis provides a useful summary:

Similarly any country whose debt levels are too high, so that it faces financial distress costs that will force a slowdown in growth and an unsustainable rise in debt, will have to improve it’s relative ability to repay. In that case there are also roughly three ways it can do so:
There is I guess a fourth way – the country can “grow out” of its debt burden – but although we will hear this fourth way invoked a lot, I think we can safely ignore it. High debt levels themselves prevent growth by encouraging disinvestment and altering the incentives for investors and creditors in ways that punish growth...

The ongoing collapse of borrowing by businesses and consumers clearly indicates that growth-preventing, debt-fuelled disinvestment is well under way in Ireland. It looks like we'll need all the help we can get to deflate the debt. Even from rock stars.

Sure I can see it now: the 'Deflate the Debt' gig in Phoenix Park. The greatest line up of Irish and international musical talent ever. It would even be something to look forward to next summer as we freeze our way through the winter.