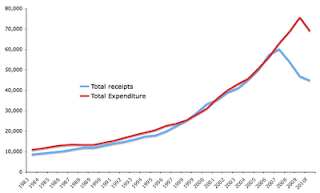 One thing is becoming clear as the next General Election approaches: the Irish have their hearts on the Left, but their wallets are on the Right. How else to explain the findings - in multiple polls - that the Irish electorate favour Labour's Eamon Gilmore among political leaders but want Fine Gael's proposed policy mix to address the budget deficit, i.e.: mostly spending cuts with just a few tax increases? And no, it's not just the 'Inda' factor. The Irish want a high minimum wage, generous state pensions for the elderly and a commitment to our overseas aid objectives. But we also want to tear up the Croke Park agreement, cut the wages of civil servants and get rid of all the quangos. In a nutshell: high spending, low taxes. A winning formula to be sure (it got Fianna Fail re-elected several times, come to think of it).

But now that the country is in receivership (at the behest of the ECB: Ireland's primary debenture holder), we can no longer get what we want - only what we can afford. And there's a large gap between the two, as the chart from True Economics makes clear. Tragically it has taken the advent of national receivership to bring about changes - including the dismantling of anti-competitive practices in the sheltered sectors of the economy (by Q3 2011 according to the memorandum signed by our negotiators) - that we should have been capable of delivering ourselves. Nevertheless, these changes will be welcomed, even if it is galling to have to report like parolees to the authorities every quarter on our progress towards rehabilitation.

Irish hearts will harden in the months and years ahead, especially as our wallets and purses feel emptier. But we will retain our innate compassion and capacity to support one another in our families, communities and voluntary organisations. Even if we are less empathetic towards our shrinking State.

The party that champions a credible combination of policies that appeal to Irish hearts and wallets will be the biggest winner at the next General Election. And the one after that.
Posted by Gerard O'Neill at Sunday, December 05, 2010