A team from Harvard have worked with Google on a project they are calling culturomics - a fusion of culture and genomics. An oddly clunky word for a project about words. It seems to me they're mostly studying memes - for which there is already an established term: memetics. Nevertheless, the latest output from the project is brilliant. Their Ngram Viewer enables the user to track the historical usage of 500 billion words from millions of books in different languages. According to the folks in Google:

Since 2004, Google has digitized more than 15 million books worldwide. The datasets we’re making available today to further humanities research are based on a subset of that corpus, weighing in at 500 billion words from 5.2 million books in Chinese, English, French, German, Russian, and Spanish. The datasets contain phrases of up to five words with counts of how often they occurred in each year.

In others words: hours of endless analysis - or distraction, depending on your viewpoint. Here are just a few I looked at. Firstly, look at the word 'Ireland': 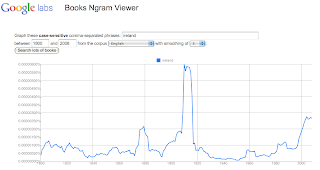 1916 was our 'moment in the sun' in terms of the global zeitgeist, though there has been an interesting up-tick in the trend since the late 1990s.

On a more philosophical note, it is interesting to compare the cultural trend in the words 'Freedom' and 'Equality'. First from books in the English language: 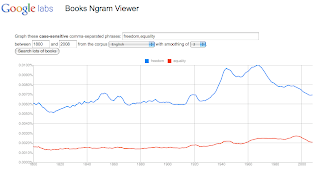 Freedom has weighed more heavily in the English speaking world than Equality, though the former seems to have peaked in the 1960s, whilst equality has also been on a downward trend since the late 1990s. But let's not be culturally myopic. The next chart shows the trend for Freedom and Equality in Russian language books: 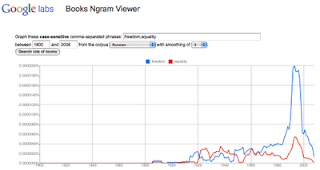 Spot the fall of the Iron Curtain. And note the collapse in references to both Freedom and Equality over the past decade. A certain disillusionment setting in perhaps?

What stories - and memes - will you discover?
Posted by Gerard O'Neill at Friday, December 17, 2010