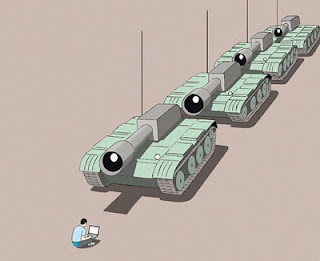 Could World War III be fought and won while the rest of us are asleep? It may seem an absurd suggestion, but that's one scenario put forward recently for the end of the American Century by 2025:

It’s 11:59 p.m. on Thanksgiving Thursday in 2025. While cyber-shoppers pound the portals of Best Buy for deep discounts on the latest home electronics from China, U.S. Air Force technicians at the Space Surveillance Telescope (SST) on Maui choke on their coffee as their panoramic screens suddenly blip to black. Thousands of miles away at the U.S. CyberCommand's operations center in Texas, cyberwarriors soon detect malicious binaries that, though fired anonymously, show the distinctive digital fingerprints of China's People's Liberation Army.

The first overt strike is one nobody predicted. Chinese “malware” seizes control of the robotics aboard an unmanned solar-powered U.S. “Vulture” drone as it flies at 70,000 feet over the Tsushima Strait between Korea and Japan. It suddenly fires all the rocket pods beneath its enormous 400-foot wingspan, sending dozens of lethal missiles plunging harmlessly into the Yellow Sea, effectively disarming this formidable weapon.

Determined to fight fire with fire, the White House authorizes a retaliatory strike. Confident that its F-6 “Fractionated, Free-Flying” satellite system is impenetrable, Air Force commanders in California transmit robotic codes to the flotilla of X-37B space drones orbiting 250 miles above the Earth, ordering them to launch their “Triple Terminator” missiles at China's 35 satellites. Zero response. In near panic, the Air Force launches its Falcon Hypersonic Cruise Vehicle into an arc 100 miles above the Pacific Ocean and then, just 20 minutes later, sends the computer codes to fire missiles at seven Chinese satellites in nearby orbits. The launch codes are suddenly inoperative.

As the Chinese virus spreads uncontrollably through the F-6 satellite architecture, while those second-rate U.S. supercomputers fail to crack the malware's devilishly complex code, GPS signals crucial to the navigation of U.S. ships and aircraft worldwide are compromised. Carrier fleets begin steaming in circles in the mid-Pacific. Fighter squadrons are grounded. Reaper drones fly aimlessly toward the horizon, crashing when their fuel is exhausted. Suddenly, the United States loses what the U.S. Air Force has long called “the ultimate high ground”: space. Within hours, the military power that had dominated the globe for nearly a century has been defeated in World War III without a single human casualty.

All very exciting in a Halo 3/Call of Duty sort of way. But the less exciting, though equally dangerous reality of cyberwar in 2010 is getting a lot of attention right now. The latest dispatch from Stratfor has a fascinating piece on China and its double-edged cyber sword. It turns out that:

There have been low profile 'skirmishes' in the obscure world of cyberwar/espionage recently, including the 'accidental' re-routing of 15% of the world's entire internet traffic through Chinese servers for over 15 minutes last April. And of course the Wikileaks saga has brought home to most governments (especially the United States) just how important net security is from a national security perspective.

Already China is a major internet power - for example, Tencent is much bigger than Facebook - though you likely haven't heard of the former (read more in another excellent analysis from Mary Meeker). But as Stratfor points out, it is a double-edged cyber sword. Turns out that China is the world's largest market for software piracy: 79% of all software sold in China last year was pirated it seems. And there's the other edge: vast tracts of China's economy, government and military are using unlicensed software (it's cheaper after all), with no security patches or updates (since only the licensed ones get those). So what? Here's what: apparently Stuxnet was able to penetrate Iran's nuclear facilities operating software because the Iranians were using unlicensed versions of Siemens software.

But the really scary thing - as illustrated in the scenario at the top - is that in cyber warfare, as in nuclear warfare, there is a real, strategic incentive to 'get your retaliation in first'. The first mover advantage can make you the last mover as well.

Bet that took your mind off the IMF and senior bondholders for a while. Sleep tight.
Posted by Gerard O'Neill at Thursday, December 09, 2010