Ireland's Muslim population is forecast to treble over the next twenty years. That's according to a new Pew Research study.  They estimate there are 43,000 Muslims in Ireland today and that there will be 125,000 in 2030. Their share of the total population will more than double, albeit from a lowly 0.9% to 2.2%. We'll still be a long way from the 10.3% forecast for France for instance. They also project there will be 5.5 million British Muslims by 2030 as well.

Of course, theirs is mostly an exercise in assumptions and extrapolations - as are most demographic projections inevitably. And I'm not so sure Ireland's Muslim population will grow so fast or so large. Take the issue of asylum seekers. According to Eurostat we have the lowest level of approval for asylum seekers in Europe (1% in Q3 2010 vs the EU average of 25%) - and as it happens over half of such asylum applicants to Ireland are Muslims (from Nigeria and Pakistan in the main). Add to that the fact that the numbers applying to Ireland for asylum have plunged (a sign, it seems, of improving circumstances in their home countries) and it becomes hard to foresee very substantial growth in Muslim numbers in Ireland over the next twenty years.

Pew don't forecast the number of Christians in Ireland by 2030, but I suspect that Ireland will still be an overwhelmingly Christian country (in ethos as well as identity), regardless of the so-called 'Eurabia' scenario. 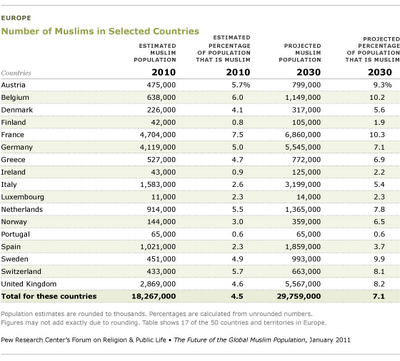