Ireland's forthcoming election is unlikely to see much polarisation between the Left and the Right politically speaking. That's not how we do things. Perhaps we shouldn't be surprised, for Ireland's electorate is firmly in the middle when it comes to the traditional Left-Right spectrum. Earlier this month, my company asked 1,000 adults to answer the question: "In politics people sometimes talk of left and right. Where would you place yourself on a scale from 0 to 10 where 0 means the left and 10 means the right?" The results - comparing the distributions along the spectrum for males and females - shows a high clustering around the middle: 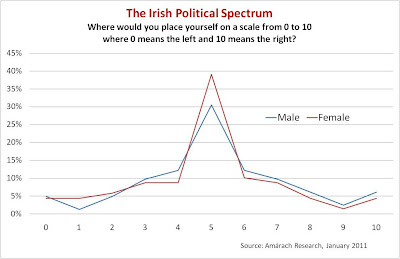 The same question has been asked before in Ireland - using a different methodology - and in the past the electorate have been more right of centre than in our own survey. Again, it may be a matter of methodology. It should be noted that the graph above excludes 'don't knows': they make up a quarter of the population (much higher among females than males).

All of this poses an interesting question for political parties as they prepare their manifestos for the forthcoming election: just how far to the Left or to the Right should you pitch your stall in order to win extra votes, assuming you continue to appeal to the mass middle?
Posted by Gerard O'Neill at Monday, January 24, 2011