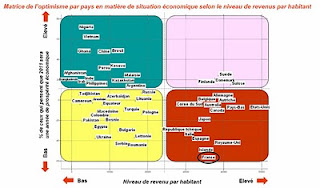 A recent worldwide Gallup Poll (in French only) paints an extraordinary picture of inequality. Not that sort of inequality. I'm talking psychological inequality. For it seems that the world's wealthiest nations are suffering from an unfair share of pessimism right now. The chart plots income per capita (horizontal axis) against the percentage in each country who think 2011 will be a year of economic prosperity. The world's richest countries are mostly in the bottom right hand box, but look at who is in the top lefthand box (low incomes but high expectations): Nigeria, Vietnam, China, Brazil etc. (Ireland wasn't included in the survey but I think you can guess where we would be on the chart).

As PWC explain it in their new report - The World in 2050 - the 'E7' (China, India, Brazil, Russia, Indonesia, Mexico and Turkey) are on the fast track to overtake the G7 in the next twenty years. And it isn't just a matter of economics. In a similarly entitled report published yesterday, HSBC point to demographic trends as the key driver of the West-East rebalancing now under way. The Worried Rich of the developed world are having fewer babies - whilst the Hopeful Poor are in the demographic sweet spot Ireland occupied until recently: the number of adults at work is expanding even as the numbers retiring are also on the increase.

But all these trends should give us reasons to be cheerful - the title of a recent post by Matt Ridley. Rising affluence means less violence. As he puts it:

What is more, this process generates virtue. The essence of virtue is co-operation: pro-social rather than anti-social behaviour. Study after study confirms that immersing people in commerce makes them nicer: le doux commerce, Montesquieu called it. Growth comes about through people working for each other. Self sufficiency is poverty; prosperity is mutual exchange and specialisation. The more you specialise in doing one thing for strangers and they each specialise in doing one thing for you, the better your productivity and the greater your standard of living. Millions of people you will never meet contributed to making for you each of the objects you use in your everyday life. Far from being a selfish creed, economic growth spreads collaboration.

I read Matt's book - The Rationalist Optimist - over Christmas: a perfect antidote to the doom and gloom loop we are trapped in here in Ireland. We Worried Rich need to get over ourselves. We are in a race to the top, not a race to the bottom. I wish the E7 well.
Posted by Gerard O'Neill at Friday, January 07, 2011