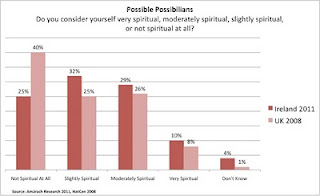 If David Eagleman wants to set up a church he should consider Ireland. I've mentioned him once or twice before. David has coined the term possibilianism to explain why he isn't an atheist, theist or agnostic. His ideas may not add much to the canon of Augustine, Aquinas nor Kant, but they do seem peculiarly apt for the times we live in.

We Irish are becoming a nation of possibilians. Despite the decline of formal religious observance, we still consider ourselves to be a spiritual people. More so than our neighbours in the UK. The chart shows the responses to the question 'do you consider yourself very spiritual, moderately spiritual, slightly spiritual or not spiritual at all?' The UK results are from the BSA survey I referred to in my previous post. There, 40% of British adults describe themselves to be 'not spirtual at all' versus just 25% of Irish adults.

The Irish Church of Possibilianism nevertheless has some notable demographic skews. Irish men are twice as likely to describe themselves as 'not spiritual' compared to Irish women (32% vs 18%). And of course younger people are more likely to be in the non-spiritual segment (37% of 16-24s vs 20% of the 45+ age group).

Still, Possibilianism is a belief system with real possibilities. But I'll let David explain it:


David Eagleman on Possibilianism from PopTech on Vimeo.
Posted by Gerard O'Neill at Sunday, February 20, 2011