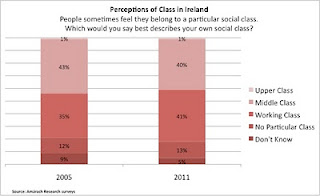 Here's one measure of the shock to the national psyche from the recent collapse: the percentage of adults who describe themselves as middle class has gone down over the past six years.

All of this suggests that social mobility has finally arrived in Ireland: of the downwardly mobile kind. Workers of the world unite, you have nothing to lose but your debts...?

* based on nationwide surveys in 2005 and February 2011 by Amárach Research of 1,000 adults, quota-controlled by gender, age and social class.
Posted by Gerard O'Neill at Wednesday, February 16, 2011