"The older generations have eaten the future of the younger ones."
Giuliano Amato

Is there a Generation War brewing?  Amato, Italy's former Prime Minister, thinks so. And youth unemployment may be the trigger. The riots in Tunisia and Egypt have been linked by many to a burgeoning generation of unemployed young people. Or more precisely: unemployed young men. Erica Orange calls it malecontentment:


As we look at what is happening in Egypt politically, socially and economically, a combination of frustration with the existing system, a yearning for democracy, a desire to participate in decision-making and general dissatisfaction have all come together to create the current situation on the streets. An important lesson here, too, is the realization that if the interests of the young – especially the young males – are not taken care of, political stability in any country can be threatened. So this may be just the beginning.

Peter Coy calls it the Youth Unemployment Bomb. He cites shocking statistics showing that youth unemployment has reached 24% on average throughout North Africa and the Middle East. Or at least it would be shocking if we hadn't already reached and exceeded that level here in Ireland. I've copied the following table from the latest Eurostat analysis (pdf) and highlighted the Irish figures: 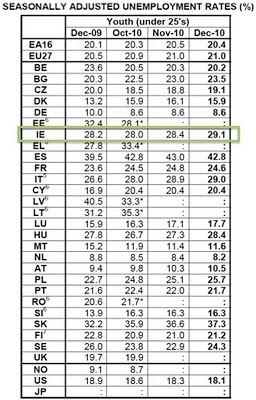 Ireland's youth unemployment rate is now 29.1% - the third highest rate in Europe - with the highest rate found in Spain: at a truly scary level of 42.8%.

Coy's article details some of the excellent work being done in different countries - involving various stakeholders - to tackle the youth unemployment problem. I consider it be the biggest single issue facing us in Ireland in terms of its long term impact. Debts can be repaid and loans can be forgiven, but lives cannot be lived again. In 10 and 20 years time we will be living with the consequences of what we do or do not do for our young unemployed long after the interest rate on IMF loans has been forgotten. Hence youth unemployment must be the priority in this election and for the next government.

For if it is not we will indeed have eaten their future.
Posted by Gerard O'Neill at Friday, February 04, 2011