I must confess I haven't read any of the election manifestos yet. Nor do I intend to, at least until after the election. If there's a multi-party coalition then the manifestos are moot - it'll be the programme for government that will count. Of course, if there's a Fine Gael majority government then I might just revisit their manifesto...

I don't doubt you can learn a lot from the manifestos - though you'll probably learn more about the self-perceptions of the political parties than their ultimate intentions. For fun I've copied the text of the manifestos of the four main political parties into Wordle. In case you're not familiar with it, Wordle takes a text and creates a word cloud of the contents with the more common words appearing larger than the less common ones.

The chart below shows that both Fine Gael and especially Labour are quite happy to talk about themselves and their plans in their manifestos. Fianna Fail go to the other extreme - hardly mentioning themselves in their own manifesto! Talk about low self esteem... Sinn Fein, to their credit, are the only main party using Irish extensively throughout their manifesto: 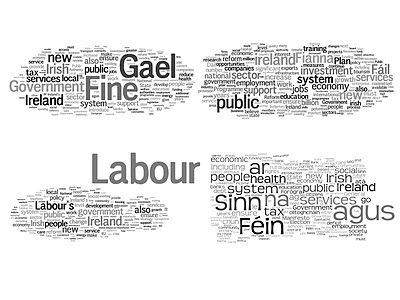