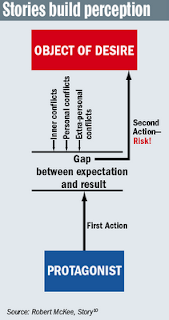 "Story is born where the subjective and objective realms touch, in the gap between expectation and reality. The protagonist acts in pursuit of a desire or goal, and the world around them reacts; this is where conflict occurs, the essence of all storytelling. That’s what we’re all doing, every day of our lives. That’s why stories are so important."
Richard Cordiner

Someone who was part of the Obama election team explained to me that the essence of Obama's campaign was 'the unfinished story': that the election of black president would represent the final chapter in the story of America's difficult history in relation to racial equality. What is Ireland's unfinished story?

The image - and the quote - are from an article interviewing Richard Cordiner who one of the most interesting writers on the theme of 'story' I have come across in a long time. As I've noted before, the use of story is the most powerful means we have for dealing with uncertainty and guiding us towards the future. We face extraordinary uncertainty here in Ireland right now. Which is why we need a story - and the political leadership to communicate it convincingly - in order to inspire us to face the future resiliently.

General elections tend to default into shopping lists and horse trading: GE 2011 is no different in that regard. But this is the most important election in our sovereign history, as those we elect will face into an unprecedented combination of domestic and international forces for change and uncertainty. Using the road map in the Cordiner's diagram above, what is our national 'object of desire' and what must we do as the protagonists to face the conflicts ahead in order to reach our final destination? That's a story that needs to be told, even in the few days remaining before the voting on Friday.

As for Ireland's unfinished story? That's about securing our freedom, of course.

Enjoy this presentation from Richard Cordiner (ht UK COI), but best download the powerpoint so you can read his very helpful presentation notes that accompany each of the slides: