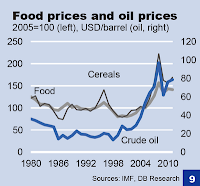 The latest inflation data for Ireland shows cocoa prices rising by 26.6% in February. That's very hot chocolate. What's going on? The chart from DB Research gives us one clue: when oil prices are rising so do food prices. And the link appears to be strengthening:

The links between food and energy economies are stronger than ever. The food sector uses about 10% to 15% of all energy in the industrialised countries: for chemical fertilisers, transport fuel, on-farm activities (irrigation, crop drying, heating of green houses and livestock sheds, tractor fuel) and for the end of the value chain (processing of crops and foods, refrigeration and cooking).

...The two-way link between food and energy makes the level of oil prices a significant factor for the production and distribution of food. Higher oil prices will tend to contribute to higher food prices – by increasing input and production costs and reinforcing demand for biofuels. A tighter connection between oil and food prices also likely drives an increased occurrence of spikes in food prices.

So the outlook for oil prices is a good indicator of that for food prices. Which makes the latest developments reported by Stratfor all the more worrying:


There is a strong potential for clashes to break out March 11 between Saudi security forces and protesters, particularly in the vital Eastern Province. Saudi authorities have taken tough security measures in the Shiite areas of the country, deploying about 15,000 national guardsmen to thwart the planned demonstrations by attempting to impose a curfew in critical areas. Energy speculators are already reacting to the heightened tensions in the Persian Gulf region, but unrest in cities like Qatif cuts directly to the source of the threat that is fueling market speculation: The major oil transit pipelines that supply the major oil port of Ras Tanura — the world’s largest, with a capacity of 5 million barrels per day — go directly through Qatif.

Enjoy your breakfast.
Posted by Gerard O'Neill at Friday, March 11, 2011