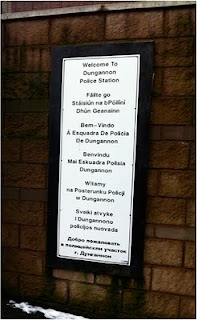 This is the sign outside the police station in my home town of Dungannon in Northern Ireland: it says 'Welcome to Dungannon Police Station' in seven different languages. It used to say it in six languages as they had forgotten to include the message in, ahem, Irish ... slight oversight. Now sorted.

One striking thing about the population of Dungannon is the share of foreign nationals now living there. About 20% by some estimates. The presence of large food processing factories in the area has been the main reason for attracting large numbers of foreign workers in recent years. This month's UK census will provide more accurate information (rather than just guestimates) in the near future.

By way of contrast I was in Totnes in Devon over the weekend. It is a remarkably 'homogeneous' town (i.e.: almost exclusively white, English-born inhabitants) - which my friends there agree makes it quite unusual by comparison to nearby Plymouth never mind most other English cities nowadays. But there is the clue perhaps. Totnes is a very small town (a third the population of Dungannon), and doesn't have any large-scale food processing industries. Though it does have plenty of organic farms - they just don't employ many people.

So it seems much of the variation in the distribution of immigrant populations has been mostly driven by the availability of work. And not, say, by mythical levels of social welfare payments. Though the latter do influence the level of skills of immigrants according to a recent VoxEU study.

Here in the Republic of Ireland we have something of the same work-related pattern of migrant population distribution (e.g.: Brazilians in Gort). But with the work drying up it seems that many immigrants are becoming emigrants (in fact, they make up the majority of emigrants leaving Ireland).  And given the Eurostat report today showing that Ireland rejected 98.4% of all asylum applications last year (versus an EU average of 75%: 76% in the UK), then it looks like the Republic will end up more like Totnes than Dungannon in years to come.

Though hopefully with more going for our economy than farming and tourism...
Posted by Gerard O'Neill at Tuesday, March 29, 2011