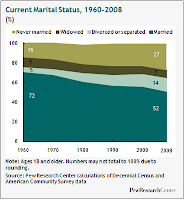 "The victims of the most serious individual and social catastrophes are often not even aware: individuals become stultified, societies become degraded, unawares." Don Colacho

The collapse of marriage in the western world is one of those trends that everyone sees happening but is nevertheless considered beyond our control, like the weather. The chart, from Pew Research, shows the almost inexorable decline in the share of married people among US adults since 1960. The situation in Europe is more mixed - the overall marriage rate (marriages per thousand population) has fallen over the past ten years, especially in the larger countries, but the marriage rate has risen in 11 (albeit, smaller) European countries - including Ireland (where the institution of marriage is still in a fairly healthy state). As for divorce, the good news is that it is also in decline (in the United States) and static in Europe - possibly because there are fewer married people to get divorced...

But, as the chart shows, the real growth trend is in the share of singles in the population. In Ireland's case, the share of non-married females in the total population is returning to levels last seen in the 1930s.  To coincide with next week's International Women's Day (I can't wait) Eurostat have published a statistics report on Europe's households. It shows that almost one in five households now comprises single women without children, and a further one in ten comprises single men without children. Their numbers have risen steadily in recent years. We appear to be approaching a 'Single-arity' whereby there will be more households comprising single women than couples with children. Germany, Finland and Austria have already reached that point.

What's going on? According to Kay Hymowitz it's all men's fault: they need to 'man up' and start getting married, rather than remaining stuck in adolescence, and meanwhile single women are running out of patience. Needless to say, quite a few have begged to differ (it still takes two to get married etc), including female bloggers. Stuart Schneiderman explains the male perspective for the 'marriage boycott', noting that women are also at fault (preferring to remain free and single until their thirties):


No one is trying to tell women what to do. But if women want to do as they please, then, as moral beings, they also need to take some responsibility for the aftershocks. Even when those aftershocks are a generation of angry young men.

While the Elusive Wapiti points out that the 'grand bargain' that is marriage is vital to the health of society:


Last, it is not true that men will work for sex... Rather, men trade their labors for a durable link to their progeny.  That is is the grand bargain that is struck in every patriarchal society...a man's labor for a man's legacy.  Sex is merely the vehicle through which this compact is implemented.

We are still some way away from the Single-arity here in Ireland (we are among only 3-4 EU countries where there are still more households comprising a couple with children than single male/female households combined).  And the economic crisis will undoubtedly curb the enthusiasm of young men and women to set up households on their own. Though unless there is a revolution in western society's attitudes towards marriage (the old-fashioned, heterosexual kind) we will likely lurch further towards the Single-arity and yet more women like Kay Hymowitz will wonder what's going on...
Posted by Gerard O'Neill at Saturday, March 05, 2011