Here's another interesting finding from the Eurobarometer research on European identity that I mentioned in my last post: it seems that the Euro currency is the main source of our sense of being European. Especially in Ireland - I've charted the average EU 27 and Irish answers below: 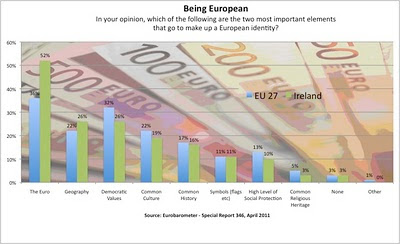 Mind you, the survey was conducted a year ago - in March-April 2010 - even though the results were published just last week. My guess is that we become a lot less enamoured with Europe in the intervening period. And not just in Ireland.

Fifty four years after the foundation of the European Union (or European Economic Community as it was originally known) it turns out that the main source of common identity is a currency that has only been in circulation for less than twelve years. Which suggests then the our sense of being European is very shallow indeed. And therefore very, very fragile.

Our fellow Europeans in Brussels and Frankfurt should pay more attention to their own surveys...
Posted by Gerard O'Neill at Sunday, April 03, 2011