A Tax on Young Men 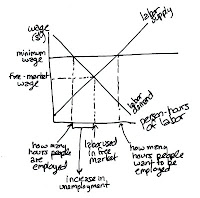 And so it has come to pass: in the face of rising unemployment, record levels of emigration and a widening gender education gap the Government has decided to make it even more expensive to employ young men. Make no mistake about it: the minimum wage is a tax on young men, especially those with low/no skills. It is young men who are more likely to be unemployed (we have the highest gender unemployment gap in Europe - see latest Eurostat pdf), while young men are more likely to leave school and not progress to third level. They are also more likely to emigrate. In other words, it is young men who are on the margins of the labour market, and whose employability is more determined by the cost of hiring them than just about any other group of potential employees.

Unfortunately the Left has more or less abandoned young men as a group. Hence their ludicrous defence of a high and rising minimum wage. Apparently a high minimum wage is good because it boosts aggregate demand in the economy. But the odd thing is they never take their argument to its logical conclusion: why not raise the minimum wage to €50 an hour if its macro-economic benefits are so obvious? The reality is that employers don't hire unskilled, inexperienced staff on the basis of aggregate demand assumptions. They hire them on the basis of micro-economic assumptions about affordability and productivity. Increasing the minimum wage increases the risk an employer takes in incurring the cost of additional staff. And right now employers are a risk-averse lot. I was going to add 'obviously' only it doesn't seem that obvious to the powers-that-be.

The real challenge facing the Government right now is how to a) stop the haemorrhage of young people caused by emigration and b) prevent a generation of young men losing out on vital work experience at a crucial stage in their lives. For as the Fraser Institute observes:


Lost job opportunities for young people are especially unfortunate given that entry-level jobs, which generally pay the minimum wage, are a stepping stone to better paid employment. These jobs enable workers to develop skills and gain experience that ultimately lead to higher productivity and wages. In fact, research shows that after one year, more than 60 per cent of minimum wage workers earn more, with a typical wage gain of about 20 per cent. After two years, the percentage of workers earning more than the minimum wage increases to more than 80 per cent.

But that happy outcome isn't going to happen in Ireland if our young men and women have emigrated because they have become unaffordable and therefore unemployable thanks to the minimum wage...

I suggest an alternative solution. Simply remove all regulations in relation to wage rates (and other taxes on labour such as employers' PRSI) in the economy for a period of, say, three years. If at any time in that period the unemployment rate falls below 10% then restore the regulations if that's what the electorate wants. But in the meantime stop the tax on young men.
Posted by Gerard O'Neill at Saturday, April 16, 2011