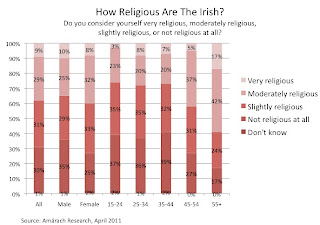 Easter is my favourite holiday of the year: it doesn't have the manic build up that precedes Christmas, whilst it still retains that sense of a time apart from the busy-ness of everyday life. For a few days anyway.

But Easter is more than an extra long bank holiday weekend. The Easter message - that those of us raised as Christians will have been imbued with - is one of hope.  It is a hope based on the deepest human need for transcendence, as recently observed by self-described atheistic humanist Brendan O'Neill:


In his book Transcendence and History: The Search for Ultimacy from Ancient Societies to Postmodernism, Glenn Hughes describes human communities’ longing for some ‘shared human experience [that] transcends biological, psychological and cultural circumstance’; for ‘human participation in a dimension of meaning that is non-particular, non-finite’. That is, the search for something bigger than ourselves and our routine lives, for a sense of purpose that goes beyond our mere biological existences or daily toil.

That is one reason why religious faith remains strong in Ireland, despite the appalling behaviour of the Catholic hierarchy in the past (and, in some instances, in the present). A survey this month by my company asked a representative sample of 1,000 adults to what extent they consider themselves to be religious. As the chart shows, only 30% of Irish people say they are 'not religious at all', with a slightly higher proportion describing themselves as 'very or moderately religious'. The chart also confirms two well established findings about religiosity in general: men are more likely to be non-religious than women; and older people are generally more religious than younger people. Though note that is Ireland's 35-44s that are the greatest doubters when it comes to religious matters. Furthermore note that almost two thirds of Ireland's 15-24s view themselves as being religious, albeit it 'slightly or moderately'. So not quite a generation of atheistic materialists it would appear...

Nevertheless, the Irish people's need for transcendence, like that of most people past and present, means that religion has a good future ahead of it in Ireland. But we will experience transcendence in different ways - and via different religions and philosophies. For some, transcendence will be found in the comfort found through ritual, for others it will be found in the familiarity of their childhood faith, seen through older, wiser eyes (as beautifully described by Anne Carson, ht an Easter-mellowed Epicurean Dealmaker).

While still others will find transcendence in the emerging insights of neuroscience - in the power of the outward gaze - and the realisation that the right hemisphere of the human brain has evolved to believe. As Iain McGilchrist puts it in The Master and His Emissary (the most powerful and original book I have read in ten years - do buy and read the whole thing):


Believing is not to be reduced to thinking that such-and-such might be the case. It is not a weaker form of thinking, laced with doubt. Sometimes we speak like this: 'I believe that the train leaves at 6.13', where 'I believe that' simply means 'I think (but am not certain) that'. Since the left hemisphere is concerned with what is certain, with knowledge of the facts, its version of belief is that it is just absence of certainty. If the facts were certain, according to its view, I should be able to say 'I know that' instead. This view of the world comes from the left hemisphere's disposition towards the world: interest in what is useful, therefore fixed and certain (the train timetable is no good if one can't rely on it). So belief is just a feeble form of knowing, as far as it is concerned.

But belief in terms of the right hemisphere is different, because its disposition towards the world is different. The right hemisphere does not 'know' anything, in the sense of certain knowledge. For it, belief is a matter of care: it describes a relationship, where there is a calling and an answering, the root concept of 'responsibility'. Thus if I say that 'I believe in you', it does not mean that I think that such-and-such things are the case about you, but can't be certain that I am right. It means that I can stand in a certain sort of relation of care towards you, that entails me in certain kinds of ways of behaving (acting and being) towards you, and entails on you the responsibility of certain ways of acting and being as well. It is an acting 'as if' certain things were true about you that in the nature of things cannot be certain. It has the characteristic right-hemisphere qualities of a betweenness: a reverberative, 're-sonant', 'respons-ible' relationship, in which each party is altered by the other and by the relationship between the two...

Man's search for transcendence would appear to be hard-wired into our brain (the right-hemisphere to be precise). The word religion is derived from the Latin 're ligare' - which some interpret as 'to bind together'. And as long as we feel the need to transcend our individual existence then religion will provide the path for many to achieve just that. As it already does in Ireland.