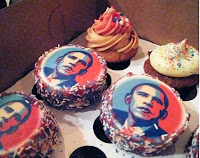 Two things struck me about President Obama's stop over in Ireland earlier this week. The first struck me watching the President proudly proclaim his English heritage during his state visit to the UK. And no, it wasn't the obvious thought. What struck me was that if it hadn't been for the visit by Queen Elizabeth only a few days earlier, then Obama's flying visit to Moneygall would have felt like going to a nice restaurant for the evening and only having dessert.

The fact that the Queen's state visit was accompanied by all the pomp and ceremony appropriate to the occasion meant that Obama's visit was the dessert after the main course. A little rushed maybe, but a nice end to a 'pleasant evening'. However, if it hadn't been for the Queen's visit I suspect more than a few of us might have been left wondering 'what was that all about?'

I guess Britain isn't the only country with a 'special' relationship with the United States.
Posted by Gerard O'Neill at Friday, May 27, 2011