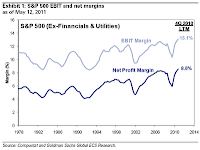 Andrew Haldane thinks the short term is getting shorter. Just one example from his recent paper:


Most recently, in 2011 PriceWaterhouseCoopers conducted a survey of FTSE-100 and 250 executives, the majority of which chose a low return option sooner (£250,000 tomorrow) rather than a high return later (£450,000 in 3 years). This suggested annual discount rates of over 20%.

And that's from a survey of people who could easily afford to sit out the three years for the extra return. Even with interest and inflation rates still near record lows across much of the developed world, it would appear our corporate leaders have lost faith in the future. Unfortunately that's our problem, not theirs.

The reason it's not their problem is obvious from the chart (from Goldman Sachs via Zero Hedge). Corporate profits are at record levels in the United States, even outside the banking sector. GS forecasts them to go even higher next year. In which case, why worry about profits in the 'distant' future when there's so much profit to be made now? Profits aren't at record levels everywhere (certainly not in Ireland, and not even in the UK). But the problem of short-termism is more pervasive. It may also explain the paradox Chris Dillow regularly highlights, namely the perceived dearth of investment opportunities that leave many businesses sitting on large piles of cash (a dizzying $65.8 billion in Apple's case). If you set the bar so high in terms of the level of returns required from investments in order to compensate for absurdly high discount rates and then, hey presto, there are very few 'worthwhile' investment opportunities out there...

So why is it our problem? It comes back to the biggest sector excluded from the Goldman Sach's chart, i.e.: the one it operates in itself, namely financial services. Tyler Cowen makes the link between profits, short-termism and inequality thus:


The first factor driving high returns is sometimes called by practitioners “going short on volatility.” Sometimes it is called “negative skewness.” In plain English, this means that some investors opt for a strategy of betting against big, unexpected moves in market prices. Most of the time investors will do well by this strategy, since big, unexpected moves are outliers by definition. Traders will earn above-average returns in good times. In bad times they won’t suffer fully when catastrophic returns come in, as sooner or later is bound to happen, because the downside of these bets is partly socialized onto the Treasury, the Federal Reserve and, of course, the taxpayers and the unemployed.

...In short, there is an unholy dynamic of short-term trading and investing, backed up by bailouts and risk reduction from the government and the Federal Reserve. This is not good. “Going short on volatility” is a dangerous strategy from a social point of view. For one thing, in so-called normal times, the finance sector attracts a big chunk of the smartest, most hard-working and most talented individuals. That represents a huge human capital opportunity cost to society and the economy at large. But more immediate and more important, it means that banks take far too many risks and go way out on a limb, often in correlated fashion. When their bets turn sour, as they did in 2007–09, everyone else pays the price.

And that's just when they play by the rules. The harm that can be done by those prepared to ignore the rules - as brilliantly explained by Matt Taibbi in his article The People vs. Goldman Sachs -  is quite frightening. They really do make our local bankers look like 'faintly dim former rugby players' in Morgan Kelly's memorable analysis.


The problem isn't just the inevitable bailouts and problems here in the real economy (where the rest of us earn a living), but also in terms of the long-run productive potential of the economy. Tyler Cowen again:


It’s as if the major banks have tapped a hole in the social till and they are drinking from it with a straw. In any given year, this practice may seem tolerable—didn’t the bank earn the money fair and square by a series of fairly normal looking trades? Yet over time this situation will corrode productivity, because what the banks do bears almost no resemblance to a process of getting capital into the hands of those who can make most efficient use of it. And it leads to periodic financial explosions. That, in short, is the real problem of income inequality we face today. It’s what causes the inequality at the very top of the earning pyramid that has dangerous implications for the economy as a whole.

So what to do?  Cowen isn't optimistic anything can be done - attempts to stop banks taking risks may end up with nobody taking any risks because the banks won't lend them any money (the situation we have in Ireland right now). The short term crowds out the long term yet again. Haldane is more optimistic - an increased focus on transparency, governance, compensation structures and taxation policies (e.g.: a Tobin tax) will be necessary.


One thing is for sure: we can't go on the way we're going, sacrificing the future on the alter of the present.
Posted by Gerard O'Neill at Saturday, May 14, 2011