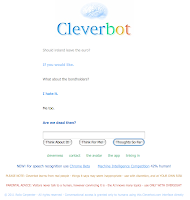 Last night I watched the third and final instalment of Adam Curtis' series All Watched Over by Machines of Loving Grace. You can catch it on YouTube if you don't have access to the BBC iPlayer.

I'm still not sure what it was about. Episode 1 was a straightforward (or as straightforward as an Adam Curtis programme can be) exposition of the idea that Wall Street captured Washington in the 1990s and turned the IMF into a global enforcer for Big Finance. No argument here. Episode 2 was a quirkier essay on how the failed dreams of the hippies in the 1960s were channelled instead into Silicon Valley and the IT revolution we are still living through. Last night's episode was much darker: linking evolutionary psychology to genocide in Rwanda to our increasingly machine like indifference to the world around us. I think.

But as with all such narratives about the rise of the machines, there is an unhealthy tendency to see humans as hopeless pawns in the digital hands of our new, silicon masters. This is nonsense of course. A recent RadioLab show on Talking to Machines explores just how human-like are the machines that Curtis and others fear. The answer is: they're not. The show introduces us to Cleverbot - one of the leading examples of machine intelligence. If your conversational level doesn't rise much above 'what's the weather like?' then Cleverbot can sustain a convincing conversation of sorts.

But chat to Cleverbot about something more challenging (Ireland's economic predicament, for example) and one quickly reaches the limit of machine intelligence. As you can see from the screen grab in the image above, Cleverbot is non-committal about Ireland leaving the euro. And hates the idea of burning the bondholders. Though my questions were a little too taxing I guess: Cleverbot ends by asking 'are we dead then?'.

That's all we need: a computer with existential angst - there's plenty of that around already...
Posted by Gerard O'Neill at Tuesday, June 07, 2011