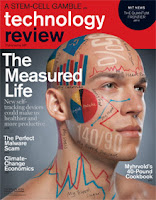 At the end of the Cold War, Western politicians talked about the Peace Dividend. Some years after, James Ogilvy coined the phrase 'the Advertising Dividend' to describe a future world in which individually tailored products and services would no longer need the loud and expensive exhortations of advertising. That world will soon be upon us.

Three forces are about to unleash the Advertising Dividend. The first is macro: the developed world is entering the 'winter' phase of the Kondratieff Cycle according to Societe General, as rapidly ageing populations in developed countries combine with massive debt overhangs to shrink the economic pie (though inflation might hide the fact for a while). Not quite a dividend, more a tax perhaps...

But there are two other, more-micro forces driving the Advertising Dividend. Ones which will present more opportunities for savvy entrepreneurs and investors. The second of the three forces is that of the Quantified Self - which describes our burgeoning capacity to track and measure our own lives (and a favourite topic of mine). The era of the Quantified Self is now upon us. Every time you use your mobile phone, the web, or even your car, you are creating an invisible cloud of uniquely personal data about yourself that follows you around 24 hours a day. We are only beginning to realise the potential significance of this for business, economic activity and society as a whole.

Which brings me to the third force: Data Liberation. The Advertising Dividend cannot be realised without the flow of data created by the Quantified Self. But that flow will only be of value to each of us individually if we own the data. In other words, Data Liberation will require that all the information stored by your mobile phone company, your credit card company, your utility company (i.e.: the digital cloud that comprises your Quantified Self) will be yours to take, keep and use as you wish. Sounds improbable? Actually the British Government have set about ensuring the Data Liberation will start to become law by the end of this year. There strategy goes by the name of 'mydata' - outlined in a recent cabinet office report and the subject of a brilliant series of studies by Ctrl-Shift.

When we finally liberate the Quantified Self to serve our needs and not those of the governments and corporations that currently claim ownership of our data, then the Advertising Dividend will finally have arrived. Even a smaller economy in the Kondratieff sense will be a more efficient, more relevant, less wasteful economy. We will experience nothing less than the economy of the sublime. Let James explain:


Despite the wonders of modern science there never seems to be enough: enough love, enough attention, enough respect, enough dignity. ... I know of no law of the constant conservation of laughter, or any limitation on joy. I see no reason to limit our sense of what is possible for the distribution of delight. ... Quite the contrary, there might be a virtuous circle of mutual reinforcement in the spread of sublime delight, like a ripple of laughter that gains momentum in a crowd. According to the economics of the sublime, there can be enough for all.