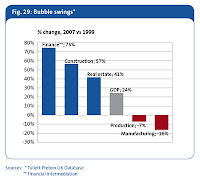 "The legacy of Britain’s previous government, which expanded the public sector incontinently, is thus an almost Marxian conflict of classes, not between the haves and have-nots (for many of the people in the public service are now well-heeled indeed) but between those who pay taxes and those who consume them.

In this conflict, one side is bound to be more militant and ruthless than the other, since taxes are increased incrementally—and everyone is already accustomed to them, anyway—but jobs are lost instantaneously and catastrophically, with the direst personal consequences. Thus those who oppose tax increases and favor government retrenchment will seldom behave as aggressively as those who will suffer personally from budget reductions." Theordore Dalyrmple

I worry a lot about our cousins across the water. Not only because of natural bonds of neighbourliness and friendship, but also because we in the Republic of Ireland are economically tied as much to the fate of the British economy as to that of the eurozone. Arguably more so since we have land border with the former.

Whilst all of the attention in recent weeks has been on the unavoidable crisis in Greece - and the somewhat more avoidable one in Washington - a separate, slower-burning crisis has been developing much closer to home. Yesterday's ONS announcement that UK GDP in Q2 grew at an annual rate of just 0.7% - well below 'stall speed' in the parlance of the American commentariat, who get upset at anything below 2.0% - points to serious risks across the Irish Sea (or should that be up the M1?)

But how serious? I got a flavour of the answer today when I received a copy of the latest commentary from Tim Morgan at Tullet Prebon. The clue was in the title: Thinking the Unthinkable - Might There Be No Way Out For Britain? The latest, I might add, in a series cheerfully entitled 'Project Armageddon'. Tim makes our own Morgan Kelly seem like a raging optimist by comparison...

The essence of the Tullet Prebon analysis is that Britain is now dealing with the legacy of binge borrowing and spending by the Blair/Brown governments that preceded the current coalition. It is a legacy which witnessed the (further) devastation of Britain's manufacturing capacity, substituting instead the fluffier (and far less sustainable) growth of financial services, construction and real estate. Sounds oddly familiar, come to think of it. The chart above neatly summarises the divergence (one of many extraordinary portrayals of things going badly in the report itself).

But the greater vehemence in the report is reserved not for the wilful collusion of New Labour with a debt fuelled bubble, rather it is reserved for the bloating of the UK public sector fuelled by taxes arising from the bubble that were ultimately unsustainable (again, a rather familiar story for an Irish audience). And not just by taxes - even worse, it was fuelled by borrowing on top of the taxes: 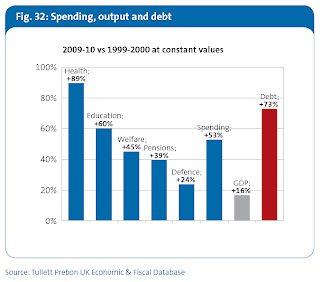 What is different about Tim Morgan's analysis is that it doesn't just confine itself to macroeconomics. He attributes much of the irresponsibility by three consecutive Labour governments to 'moral absolutism':


Perhaps the most intractable part of Britain’s economic problem is the mind-set engendered by Labour. This mind-set, which is a compound of entitlement (both personal and national), financial irresponsibility and spurious moral absolutism, makes it difficult for the public to perceive the nature of the national problem, let alone resolve it.

Not since the days of William Gladstone has a government come to power with a greater sense of moral fervour, and it is at least arguable that Tony Blair and (in particular) Gordon Brown were even more prone than ‘the Grand Old Man’ to treat the despatch box as a pulpit. The essential difference between Gladstone and New Labour, however, was that Blair and Brown peddled an essentially secular moral absolutism, albeit with at times a distinctly nonconformist flavour.

...The problem which has emerged over the last decade, and can in large part be traced to Labour’s doctrine of moral absolutism, is the widespread assumption that individuals and, by extension, Britain as a whole, have an entitlement to these advantages, when the reality, of course, is that they have to be earned on an ongoing basis.

So what next? With the UK's economy dangerously close to stall speed just as we're all hoping Ireland's economy is approaching take off, the timing is not great. To put it mildly. Tullet Prebon distinguish between two scenarios for Britain: 'bad' and 'very bad'. The 'bad' scenario - which might lead to a better future - entails radically restructuring the state, including the welfare state (e.g.: more benefits in kind rather than cash). Not easy, as anticipated by Theordore Dalrymple in the quotation above.

The 'very bad' scenario could mean that Britain ends up perceived as a peripheral European economy with excessive debts and poor economic prospects. Just like...
Posted by Gerard O'Neill at Wednesday, July 27, 2011