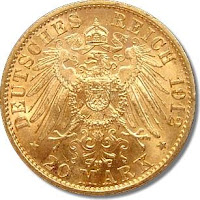 Could Germany exit the euro and re-establish the Gold Mark? Germany experienced the misery of hyper-inflation after abandoning the gold standard during World War One. Any major economy that tied its currency to gold would undoubtedly enjoy a strong currency. Too strong probably if you rely on exports - as Germany does - to sustain growth.

So maybe it's just a late silly season idea - fuelled by comments such as those of one senior German minister that the bailout of Ireland and the other PIIGS should be conditional on their giving up their gold as collateral. Very silly surely. As the latest 'Things That Make You Go Hmmm' Report puts it:


Admittedly, this idea is potentially real pie-in-the-sky stuff. So many previously unthinkable things would have to happen for something as momentous as a German ‘Geldmark’ to be instituted. I mean, the current reserve currency of the world would have to be on its knees, there would have to be financial chaos in the world’s markets and the currency union which Germany currently underpins - the Euro - would have to be on the verge of implosion. Clearly, none of those seismic events are likely to happen so we should probably stop thinking such fanciful notions and return to the real world.

Ahem, yes, very silly. Still, fears of inflation appear more embedded in Germany than fears of recession - and the idea of having a strong, stable currency just might go down well with an ageing, fearful German electorate.

However, I have good news as far as Ireland is concerned. The value of gold - in euro - held by the Central Bank of Ireland has actually declined since the start of the year (see table). That either means they have been taking advice from Gordon Brown; or else our Central Bank is one step ahead of the Germans and is getting rid of the gold before they come along and demand it for collateral.

That or the Central Bank is using the national 'silver' to pay a few of the nation's running costs...
Posted by Gerard O'Neill at Wednesday, August 24, 2011