The graph below - from Der Spiegel - says it all. But first a quote:


Once upon a time, the sole purpose of banks was to supply the economy with money. They were service providers, sources of energy for the economy, so to speak, but nothing more. But now the financial industry has largely disconnected itself from the manufacturing economy, transforming its role from subservient to dominant in the process.


The assistance was provided, but a historic opportunity was squandered in the process. None of the powerful banks was broken up, and only a few of the dangerous financial products were banned. With the central banks lending money at low rates, speculation could continue.

The financial industry recovered quickly as a result, and now it is just as powerful as it was before the crisis -- and just as dangerous, for both the economy and society as a whole.

That 'disconnection' now means that for every €1 in internationally traded goods and services (the stuff people need and want) there are over €25 worth of speculative flimflam. Now I get the need for maybe €2-€3 for every €1 of trade - trade finance and currency transactions say - or even €5-€10 if you're going to add in bonds and pension funds etc. 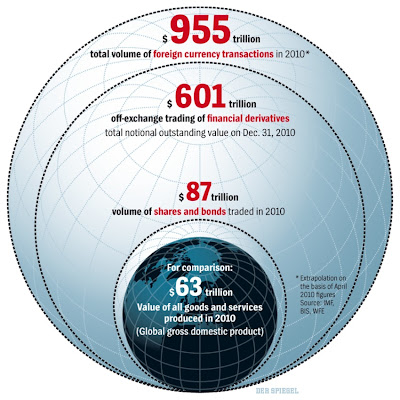