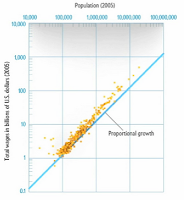 Will Dublin lead Ireland's economic recovery? It's an interesting question - and one that came up in conversation with a group of business men yesterday. I think it will - and it's all down to superlinear scaling.

I came across the concept in a presentation by Geoffrey B West to the Long Now Foundation during the summer. He's a physicist with a keen interest in explaining scaling phenomena in biology and in human institutions - especially cities. Geoffrey has applied Klieber's Law to human society and found that - just as in nature - there are genuine efficiencies to scale. For example: energy consumption per capita fall as cities get bigger (though obviously total consumption rises).

But cities do more than provide economies of scale (or sublinear scaling in the jargon). They do something else: they produce increasing amounts of some things as they get bigger - including incomes per capita, but also outputs such as creativity and innovation. This is a superlinear scaling effect. Only cities do this: which is one reason why they survive so long (much longer than animals, empires or corporations for that matter).

If the fate of humanity is inextricably linked to the future of cities, then the same goes for Ireland. The fate of our economy - and of our nation - is inextricably linked to the future of Dublin. And here's the thing: Dublin is having a (relatively) good recession. Yes we've experienced the same shock as the rest of the country in terms of the implosion of construction and the fallout from the banking disaster. But...

Dublin has a strength of infrastructure, a cosmopolitan energy and a depth of talent (Irish national and foreign national) that still makes it a very attractive place to set up business (or relocate businesses to in a growing number of instances). And what's left of non-property related wealth is also concentrated in Dublin.

All of this points to two things: firstly, Dublin is better positioned than the rest of the country to generate both endogenous growth and to benefit from internationally traded growth. Secondly, until Dublin starts growing, then the rest of the country will be moribund and recovery for the country as a whole will be delayed. Let me add a third: the political party that builds significant momentum in Dublin in the coming years will govern the country (on its own or in coalition) for the foreseeable future.

A victory for Dublin in the forthcoming All Ireland Final may be just what the city - and the country - needs right now...
Posted by Gerard O'Neill at Tuesday, September 06, 2011